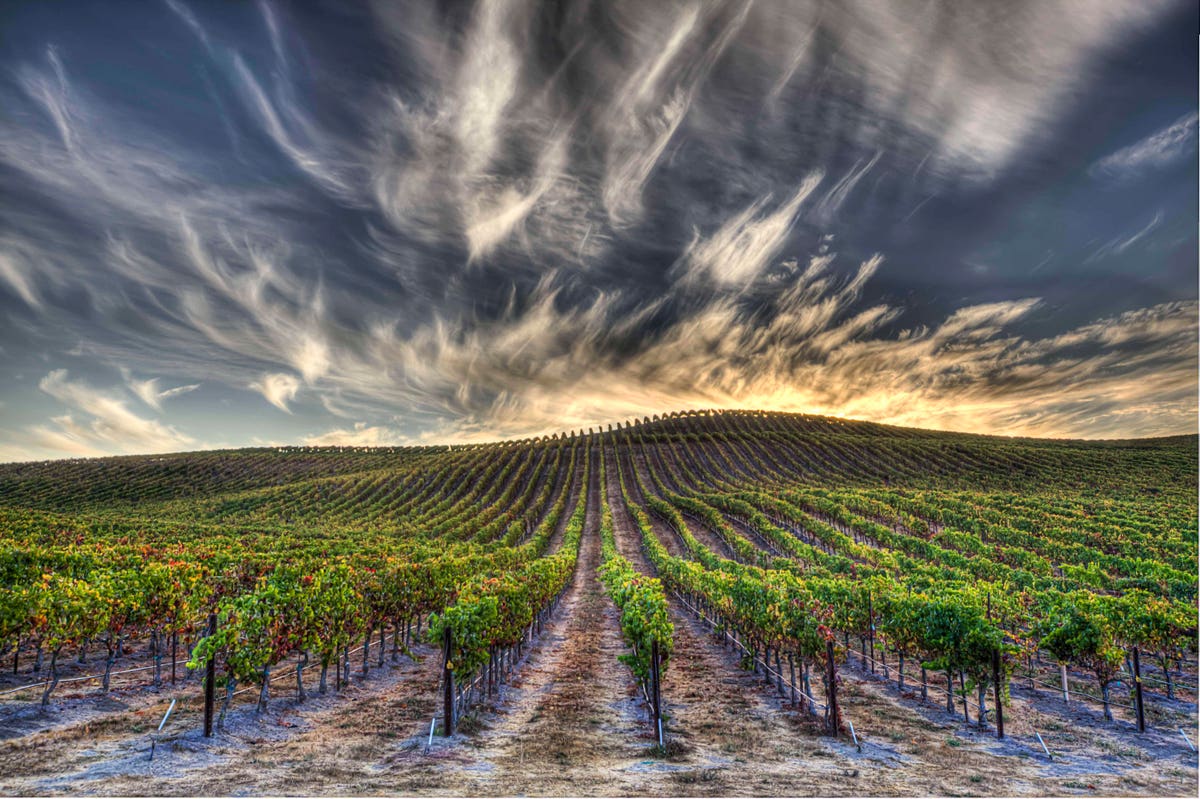 Back in 2016, Juan Pablo Torres-Padilla, who has been the CEO of an artificial intelligence (AI) company in France and has held other key positions in the telecommunications and financial investment world, decided to take the opportunity to buy the historic Napa Valley 26 acre Sullivan Rutherford Estate from the Sullivan family, the custodians of that piece of land for over 40 years. It would prove to be a good partnership in terms of handing over the estate to someone who not only wanted to bring this winery more to the forefront of the Napa fine wine world but that the history and legacy would be appreciated and built upon. The estate lies on land  that has a deep and rich history which goes back almost two centuries to 1821 when Mexico took over ownership of Napa Valley from Spain.

Mexico divided the Napa Valley into two parts: Rancho Carne Humana in the North and Rancho Caymus in the South. Sullivan Rutherford Estate director of winemaking, Jeff Cole, said that they are “essentially in the middle of the heart of Napa Valley vineyards” since the back of the border of their estate is along the Rancho Caymus line as it is right in the middle of where the property lines of Rancho Caymus and Rancho Carne Humana meet. Serendipitously, the current owner, Juan Pablo, was raised in Mexico City and was introduced to fine wine by his maternal grandfather by taking sips of Bordeaux and Burgundy. The idea that the Sullivan property sits within a border that was established long ago gave the inspiration for Sullivan’s Coeur de Vigne which means ‘heart of the vine’ in French as they believe they are in the heart of Napa Valley.

The founder of Sullivan Rutherford Estate, James O’Neil Sullivan, was a successful graphic artist in California who took a serious liking to Cabernet Sauvignon in the 1950s. He began making wine at home and through time it turned into a fierce passion that had James spending two decades trying to find the best areas in California that grew Cabernet. In 1972, on the advice from good friend  André Tchelistcheff – America’s most influential post-Prohibition winemaker, James bought a piece of land near the valley floor in Rutherford that became the Sullivan estate. There he planted mainly Cabernet Sauvignon with some Merlot and through time added Cabernet Franc, Malbec and Petit Verdot. The Sullivan Rutherford Estate would stay a small unknown gem compared to other Napa wine brands as James did not have the drive to promote it to the world but also he was happy to have his small following of wine consumers and that small following was certainly enough as the wines were made in small quantities.

James had five children of which a couple took over management of the estate but through time it proved to be too much and their passions lay in other areas so they were looking to sell around the time Juan Pablo was looking for a Napa Valley estate to buy. Although Juan Pablo has had a very successful career in France in telecom and AI industries, his love for wine was so deep that he actually spent some downtime here and there working in the cellars and vineyards of Bordeaux, Burgundy and Champagne by cleaning wine tanks and sorting fruit. But ultimately, Napa’s innovation and forward-thinking approach attracted Juan Pablo when it came to finding an estate that he would take over. After looking at around 120 Napa wineries over two years, the Sullivan property seemed like the ideal combination of having great potential yet still relatively unknown to the wider world, and hence, he could be a part of creating Napa’s next iconic estate that is rooted in an authentic tradition and history.

Despite the Sullivan estate being on the valley floor of the Rutherford AVA (American Viticultural Area) in Napa Valley, the property specifically sits a little higher up in elevation than its neighbors, on top of a gravel mound – gravel being a key component for the well-drained soils of the Left Bank of Bordeaux and their gravel mound is not as fertile or moisture absorbing as some of their neighbors’ land, according to Jeff Cole as “all the water from our property drains off.” Jeff notes their somewhat fertile soil near the valley floor gives a generosity and ripeness to the wine that is balanced out by the structure of tannin and acid that is retained by the stress due to the vines not receiving enough water. Since starting with Sullivan in 2013, Jeff has brought his experience of knowing the land, being born and raised in Napa, as well as his attention to detail that was sharpened during his time at the world class sparkling producer Schramsberg up in Calistoga in Napa Valley. Jeff never wants to produce over-extracted wines yet every year he strives for wines with a good amount of structure and freshness that are “delicious” and that do not attain the over-ripeness and jammy qualities that some might think come from the valley floor; there are a lot of nuanced differences from property to property.

Juan Pablo has hired vineyard manager Mike Wolf, one of the most famous growers in Napa that has overseen some top estates, and Mike has been implementing such changes as differing row orientation to get the best quality fruit out of the vineyards. Also, Juan Pablo is building a state-of-the-art winery that will allow Jeff to have more options in the cellar such as micro-vinification so he can isolate different qualities coming from various plots, a gravity flow winery that is gentler with the wine and just the idea of giving Jeff a lot more room and resources for future experiments.

Juan Pablo bought the historic Sullivan estate with the help of his uncle and a couple other family members and so they greatly appreciate and respect the legacy of the Sullivan family and what James Sullivan has already built as keeping the legacy of a family alive is greatly valued by the Torres-Padilla family. From Juan Pablo’s childhood in Mexico City to a successful career in France that fueled his love for winemaking even more to now owning a Napa estate that sits at the heart of where the borders were drawn when Mexico owned Napa Valley, Juan Pablo’s journey has been a rich tapestry of experiences that ultimately led him to a home connected to his roots. In France, Juan Pablo found the wines that spoke to his soul but ultimately it was the Sullivan property that became the home that had his heart.

2016 Sullivan Rutherford ‘Coeur de Vigne’: 50% Cabernet Sauvignon, 24% Merlot, 19% Cabernet Franc, 5% Malbec and 2% Petit Verdot. Jeff Cole noted that 2016 was coming off of drought season so there was a little bit more rain early on which prompted more vine growth which in turn gave a higher yield with bigger clusters and bigger berries. Hence this wine has a softer quality in terms of tannin and extraction yet it had lots of aromatics and sweet fruit with flavors of raspberry tart and a floral nose and bright acidity. The wine is juicy and rich in flavor which is balanced by that Rutherford “savory and dusty” character. Only 1,008 cases made.

2015 Sullivan Rutherford Estate Cabernet Sauvignon: 97% Cabernet Sauvignon and 3% Petit Verdot. “Three years after a drought and so everything got ripe really quick” said Jeff. The grapes were smaller so more potential for extraction, without too much, so more structure which was displayed in the wine by lots of tannin yet fine tannins with no rough edges; intense minerality with a stony quality on the nose with a linear shaped palate that had lots of energy with dried herbs on the finish. Only 400 cases made.

2017 Sullivan Rutherford Estate Cabernet Sauvignon: 87% Cabernet Sauvignon and 13% Petit Verdot. 2017 was Jeff Cole’s favorite vintage so far because although it was not an easy vintage in the vineyards, the wines turned out to have a deep concentration of fruit yet have an overall finesse to them; complex nose with hints of mint, broken earth with rich blackberry that had a broad body with plush cassis fruit flavors and layers of wet stones and pressed lilacs that had a long, silky finish. Only 400 cases made.

2013 Sullivan Rutherford ‘James O’Neil’ Merlot: 79% Merlot, 11% Cabernet Sauvignon and 10% Cabernet Franc. Jeff said that the 2013 ‘James O’Neil’ Merlot was one of the wines that convinced Juan Pablo to buy the Sullivan estate as it had the combination of deep concentration balanced by elegance. The ‘James O’Neil’ Sullivan Cabernet Sauvignon and Merlot wines come from what is deemed to be the top 5% in regards to quality on the estate. The 2013 vintage produced a smaller yield with smaller berries and so Jeff said that this wine has a long life since there is lots of structure and concentration. The nose had an enticing smoldering earth quality with rich flavors of blueberry pie with hints of vanilla that had dusty earth in the background to balance it out. Only 228 cases made.

2016 Sullivan Rutherford ‘James O’Neil’ Cabernet Sauvignon: 95% Cabernet Sauvignon and 5% Petit Verdot. The 2016 vintage gave broader and richer fruit according to Jeff. Gravel and cedar are first detected on the nose with dark chocolate and exotic spices that had a full body with layers of black and red fruit with big velvety tannins and marked acidity and an extraordinarily long length of flavor. Only 501 cases made.

Host’s Hometown: Andrew’s Hometown Eats
Relax at the Natural Hot Pools at Ngawha Springs in New Zealand
Great American Outdoors Act becomes law
Check Out This List Of The World’s Oldest Irish Whiskies
How many stairs to the tops of these iconic tall places?