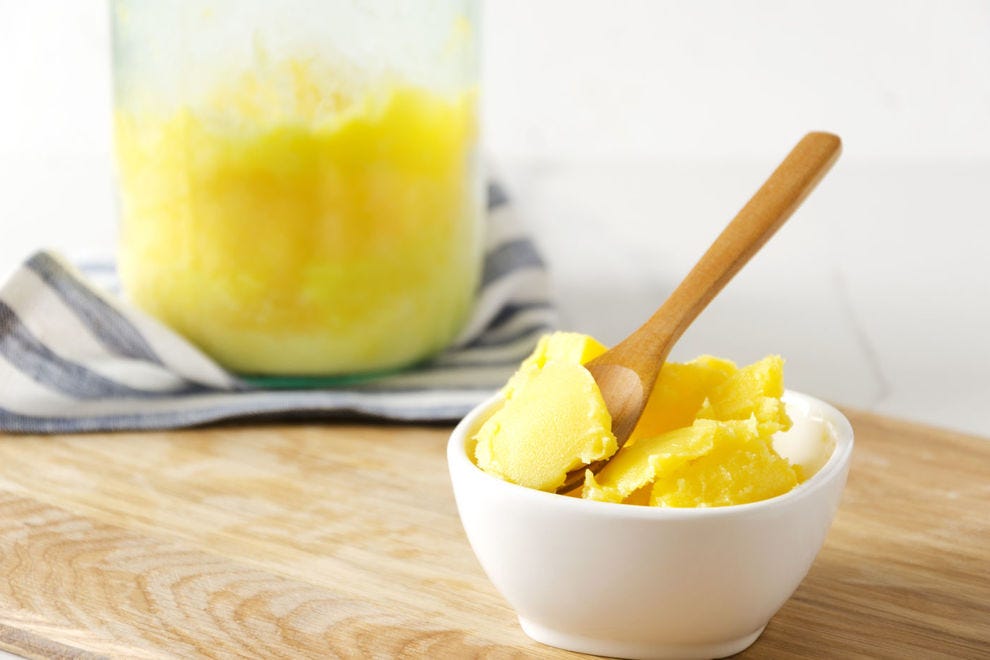 When sautéeing a piece of fish or vegetables on the stove, you usually need a bit of fat to prevent the dish from turning into a charred mess. You can generally go with oil – whether it be olive, coconut or vegetable – or butter.

But another option is beginning to make a dent in American cooking habits, even though it’s been used for hundreds of years throughout other parts of the world, namely India. It’s called ghee, and it has some fantastic cooking properties and benefits.

First of all, how do you pronounce it?

Great. Now, what is ghee?

Ghee is a type of clarified butter, which, if you’re also unclear about, is butter that has been cooked and strained to remove water and milk solids. Ghee goes one step further than simple clarified butter – after you clarify ghee, you slowly simmer it until the milk solids caramelize, imparting a rich, nutty flavor on the clarified product they leave behind.

When the liquid butter is allowed to cool and return to a solid, you’re left with ghee.

How does it taste?

Ghee tends to be one of those hyperbole-inducing foods, like macarons and gelato, that people describe quite dramatically as being “heavenly” or the “best thing ever.” In actuality, ghee tastes like a cleaner, richer, more decadent version of butter itself – more buttery butter, if you will.

And even among ghee brands, there’s a spectrum of flavor and quality. If you’re making (or buying) ghee made from quality, grass-fed cow milk, you’re going to have delicious ghee.

What’s the point? Why not just use butter?

Well, in addition to the elegant taste, cooking with ghee has some notable upgrades over butter. For starters, by removing those milk solids in advance, you dramatically increase the smoke point. That’s the temperature at which something begins to burn. Even expensive, nutrient-rich extra virgin olive oils become essentially useless when they are heated past their smoke points.

Generally, it’s the less healthy fats and oils that possess the high smoke points that we require to cook foods. Those being soybean, canola, peanut and corn. Butter, for it’s part, has a relatively low smoke point of just around 300 degrees, limiting its usage. But ghee has a smoke point of 485 degrees, making it a perfect cooking companion for practically any dish.

Well, yes and no. Ghee is concentrated. The useless water and milk solids, having been burned off, leave behind a higher vitamin content than would be found in an equal sized serving of regular butter. Ghee is rich in vitamins A, E and K, and conjugated linoleic acid (CLA), a fatty acid linked to both cancer prevention and weight loss.

And water isn’t the only thing missing from ghee. Those milk solids that have been removed? Well, those are what hold all of the lactose and casein, the dairy proteins that cause stomach cramping, inflammation, flatulence and bloating in so many of us.

Oh, wow. So ghee is great for lactose-intolerant people then?

You’re thinking too small. Ghee can reportedly help prevent the symptoms of Leaky Gut Syndrome, Crohn’s disease and ulcerative colitis. Ghee is often referred to as a superfood because of its noted soothing properties upon those with digestive conditions. The butyric acid in ghee mimics the same chemical produced as a byproduct of fiber digestion in the colon, which feeds the beneficial flora in a healthy gut biome.

I’m sold. Where can I get some ghee?

Because ghee is free of those dairy proteins found in regular butter, it’s actually shelf stable, meaning it doesn’t need to be refrigerated. Even so, U.S. grocers aren’t always aware of this fact, and sometimes stock it near the butter in the refrigerated section. If you don’t spot it there, check the baking aisle near the cooking oils. But don’t go looking for a box or bottle. Ghee is usually sold by the jar.

If you still can’t find any, you can find dozens of options on Amazon or other online grocers. Or failing that, you can always make your own. The internet is full of simple tutorials on how to make your own ghee. Just remember to start with quality, grass-fed butter.

The hottest hotels in Italy that you should know about, from Lake Como to Capri
The place that helped inspire American democracy
‘Fat But Healthy?’ New Research Suggests Fitness Doesn’t Cancel Obesity’s Negative Health Effect
Explore Reykjavik from afar on this virtual tour
How Pampered Chef Revolutionized Home Cooking